MDF is pleased to welcome Dr. Tom Cooper, MD, to our Scientific Advisory Committee (SAC). Dr. Cooper, who joined the SAC in summer 2015, is a renowned myotonic dystrophy (DM) investigator whose laboratory has made major contributions to understanding the molecular pathogenesis of the disease and pointing the way toward rational therapeutic development.

Cooper received his M.D. from Temple University in Philadelphia in 1982 and then completed a postdoctoral fellowship in the laboratory of Dr. Charles Ordahl in the Department of Anatomy at the University of California-San Francisco. In 1989, he moved from UCSF to Baylor College of Medicine in Houston, TX, where he is now a professor in the Department of Molecular Physiology and Biophysics. Dr. Cooper was appointed to the S. Donald Greenberg Endowed Chair in 2003 and to the Fulbright Endowed Chair this year.

DM, particularly the type 1 form, has been an abiding interest for Dr. Cooper since the mid-1990s, when he began probing the role of altered splicing of proteins in this disease, with particular attention to how the binding of CUGBP1 (now called CELF1) to the CUG repeat expansion in the DMPK gene contributes to this phenomenon. We talked with Dr. Cooper in October:

MDF: When did you first become involved in DM research, and what prompted that involvement?

TC: It was completely serendipitous. I was working on alternative splicing and, in 1995, I had identified a sequence in skeletal muscle and heart that contained CUG repeats and required splicing. At about that time, I happened to attend a seminar given by Lubov Timchenko [then at Baylor, now at Cincinnati Children’s Hospital Medical Center] in which she described a newly identified protein in skeletal muscle and heart that they were calling CUG binding protein, or CUGBP. [The protein has recently been renamed CELF.]

The defect underlying DM1 had been identified in 1992 as being an expanded CTG repeat in an untranslated region of the DMPK gene on chromosome 19, but I hadn’t paid much attention to that until I heard Dr. Timchenko talk. She described how the newly identified protein they were calling CUGBP binds to the expanded CUG repeats in the RNA from the DMPK gene in DM-affected cells and might play a role in the disease. I realized we had been looking at the same protein, although not at that time with myotonic dystrophy in mind.

After that, we started studying how CUGBP behaves in the nucleus, where it normally regulates splicing, while Lubov’s group concentrated on its role in the cytoplasm, where it regulates translation and destabilizes RNAs.

Normally, CUGBP, or CELF as it’s now called, is downregulated right after birth by about 10-fold. But in DM, it’s upregulated [even though it’s bound to CUG repeats in the nucleus]. Increased levels of CUGBP in DM cause more destabilization of RNA and a shift toward fetal splicing patterns. DM reverses the postnatal splicing changes.

The CUG repeats also bind and sequester [the splicing regulator] MBNL and downregulate it, changing splicing patterns that it controls. Most of our focus is on CELF, with some on MBNL. The CUG repeats in DM also are associated with a decrease in [the transcriptional regulator] MEF2, although we don’t know how that happens.

MDF: How has our understanding of the molecular mechanisms underlying DM changed since the early 1990s?

TC: I would say that, between 1992 and 2000, there was a period of befuddlement, where we were wandering in the wilderness for about eight years. During that time, it wasn’t clear how an expansion in the 3-prime untranslated region of a gene could cause disease.

There were several hypotheses: insufficient DMPK; overexpression of DMPK, at least in the congenital form of DM; and involvement of flanking genes, such as SIX5. But when these hypotheses were tested in mouse models, they didn’t yield strong phenotypes. Knockouts of SIX5 developed cataracts, but they weren’t the same cataracts as in DM. DMPK knockout mice developed cardiac problems, but later studies have suggested those might have been due to other factors. Today, the evidence is that losing DMPK is not a big deal, and there isn’t much evidence of effects of flanking genes contributing to DM.

The idea of an RNA-mediated toxic gain of function may have been proposed in the early 1990s, but it was a new idea, and it didn’t gain strong support until 2000, when Charles Thornton’s group developed a mouse that expressed expanded CUG repeats in a human skeletal muscle actin [HSA] gene. [The paper – Mankodi et al., published Sept. 8, 2000, in Science – showed that expanded CUG RNA repeats, expressed in a context completely removed from the DMPK gene and its surroundings, were associated with development of myotonia and myopathy in the mice, thus supporting the role of RNA gain of function in disease pathogenesis.]

Then, in 2001, Laura Ranum and John Day published the identification of CCTG repeat expansions in and intron of the ZNF9 gene as the cause of DM2, and that really cinched the RNA hypothesis. [The paper -- Liquori et al., published in Science Aug. 3, 2001 – showed that patients with DM2, a very similar disorder to DM1, had disease-associated CCTG expansions that, like the CTG expansions in DM1, were transcribed but not translated. The expansions which became CCUG in the RNA in DM2 and CUG in the RNA in DM1, became the major focus in the search for the molecular underpinnings of DM.]

TC: We’ve mostly been working on the changes that result from the CUG repeats in DM1. We have not done much with the CCUG repeats. Most of our focus has been on the effects on the CELF proteins, mainly CELF1, and some has been on the MBNL proteins, mainly MBNL1. Maurice Swanson [at the University of Florida in Gainesville] has done most of the MBNL work and has also worked on CELF.

More recently, our group has been looking at MEF2, which is downregulated at the mRNA and protein level in DM1, at least in the heart. MEF2 normally regulates transcription of protein-coding genes and microRNAs. It may be as important in DM1 as MBNL1 and CELF, but it may only be so in the heart.

MDF: There are a lot of mouse models of DM1. Which do you think is the most useful? 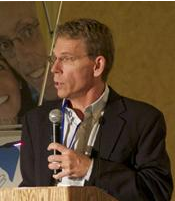 TC: Each contributes something, and none is perfect. Which one is best depends on what you want to ask.

The HSA model developed by Charles Thornton’s group is a very nice readout of myotonia and splicing changes in skeletal muscle. However, since the CUG repeats are only expressed in skeletal muscle, the heart and brain are not affected in this model.

Genevieve Gourdon’s group developed a transgenic mouse with 300 repeats in the human DMPK gene, which can expand to about 1,500 repeats over generations. [See, for example, Huguet et al., PLoS Genetics, Nov. 29, 2012.] In the mouse, large expansions seem to repress RNA expression, but this does not happen in human cells. There are weak splicing changes in the muscle in these mice, and they’re seeing some differences in the brain.

Our group developed an inducible mouse model overexpressing DMPK mRNA containing expanded CUG repeats in heart and skeletal muscle, and we saw dramatic effects in both tissues. [See Wang et al., Journal of Clinical Investigation, October 2007; and Orengo et al., Proceedings of the National Academy of Sciences, Feb. 19, 2008.] However, the animals eventually stopped expressing the CUG repeats. We really don’t know why. But now we’ve changed our approach, and we’re developing a skeletal muscle and a heart muscle model that overexpresses the DMPK-expanded CUG repeats RNA using a tetracycline-inducible system. The skeletal muscle model has splicing changes, although they’re not that strong, and shows muscle wasting. The heart model shows very strong splicing changes and cardiomyopathy.

MDF: What do you see as the most promising avenues for development of therapies to treat DM1 and DM2?

TC: An antisense oligonucleotide developed by Isis and Biogen with Charles Thornton [IONIS-DMPKRx] is being tested in patients with DM1 and has done well in safety trials.

There are so many tissues affected in DM, and it would be great if the ASO worked and could be delivered to all these tissues. But a combinatorial approach – ASOs and small molecules – is what I would expect. In mice, DMPKRx did not get into the heart, but it gets into heart and skeletal muscle in monkeys. I’m betting on it getting into the heart in humans, but I doubt it will get into the brain.

MDF: What special role do you anticipate you will play as a member of the MDF Scientific Advisory Committee?

TC: I’m very excited to be involved, because MDF has really grabbed the bull by the horns as far as moving things forward. My role will be on the scientific aspects – providing direction on what kinds of scientific questions to ask – and I’ll also be involved in making decisions about funding Fellows, recruiting and supporting young investigators who are potentially interested in myotonic dystrophy and other funding opportunities MDF releases. We need new ideas and perspectives. We’re at a very exciting point, but this is complex biology, and I think we can expect some bumps in the road.