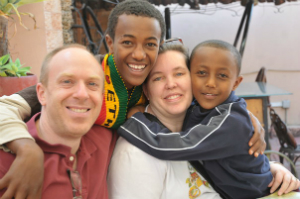 As a child growing up in South Dakota, Teresa Schmertman suffered from daily headaches - and that wasn’t her only complaint. “I had pain and stiffness in my hands,” she recalls. Because of trouble with her eyes she wore glasses, and had braces on her teeth. Her doctors put her on tranquilizers, because they didn’t know what else to do. “They were grasping at straws,” she says, “trying to figure out why I didn't feel good.”

Today, Teresa is a wife, mother, and paralegal professional, living and working from her home in Plano, Texas. And she now knows that what became a lifelong struggle with discomfort and disability was due to myotonic dystrophy (DM) that was finally diagnosed when she was 18 years old.

The diagnosis of DM1 was a shock but not a complete surprise. Teresa’s two uncles had suffered from DM, and her grandfather died of a heart attack that was probably related to the disease. But the belief in her family was that whatever might be wrong with its men, the condition wasn’t hereditary, and women didn't seem to be affected.

As Teresa matured and her afflictions multiplied, her mother decided that the time had come to explore whether they might be linked to the family condition, and she scheduled an appointment with a neurologist. “My mother didn't want to believe it, but nothing seemed to be helping,” Teresa says today. The neurologist, however, had few doubts. He took one look at Teresa, and from the family history and the shape of Teresa’s face announced almost immediately that she had myotonic dystrophy. A muscle test confirmed his diagnosis. Teresa’s mother was also tested and learned that she had DM.

“Well, that explained why I couldn’t ever keep up with my siblings when I was riding my bike.” Teresa says. “Suddenly it all made sense.”

Eventually, two of Teresa’s four siblings - a brother and a sister - would display symptoms of DM, beginning in their 30s. And her sister’s son - born before the family was aware of the condition - would display many symptoms from a young age. “It just shows how it gets worse with every generation,” Teresa says.

“The diagnosis was like having the rug yanked out from under me,” Teresa recalls. “I was 18 years old, finally on my own, going to college. I went through several emotional weeks, alternating between anger, self-pity, and the stubborn refusal to let the diagnosis get me down.”

In fact, through Teresa’s twenties, the disease made itself felt only in gradual changes. “You live your life and you adapt,” she says.

In 2002, when she was 33 years old and living in Minnesota, she married Doug Schmertman, an engineer. The couple decided not to have children because of Teresa’s hereditary condition. But after a few years, they began to think about adoption. Her brother had adopted two boys from Ethiopia, and Teresa and Doug decided to follow suit, falling for school-aged brothers, Muluneh and Sebsebe, who wanted to be adopted together.

“We knew we had a lot of love to give and they’re the sweetest boys ever,” Teresa says. The couple chose older boys because Teresa knew that she wouldn't have the strength to care for younger children. And from the start, they knew Doug would have to be very involved with raising the boys - and he has been, supportive in childrearing as in every aspect of the marriage.

Over the years the couple was raising their boys, Teresa’s DM began to affect her mobility more seriously. “You go along for a while, and gradually you understand that there’s one more thing you can’t do,” she says. There came a time when she could no longer wear high heels. She began to fall with increasing frequency. For the last two years, she’s been in a wheelchair.

Recently, Teresa and Doug made a long-planned move from Minnesota to Texas to take advantage of its warmer climate. Teresa was concerned at first that she wouldn't be able to find work, but she soon found employment through a former coworker. She works at home as a contractor about fifteen hours a week (which is about right, she says). Sometimes it’s hard to be stuck at home, but because of her disease, she needs a warmer environment than she would find in most offices and she needs other conveniences home can offer. Working at home, she can control her time. “I need to rest a lot,” she says.

In 2010, while still living in Minnesota, Teresa learned that Myotonic was sponsoring an informational conference in Minneapolis, and she and her family decided to go. “It was so close to home, we thought ‘why not?’” she recalls now.

What she heard that day kicked off a growing engagement with Myotonic and its work. She has made monthly donations to Myotonic since 2011 and now honors her parents by making donations on their anniversaries and birthdays as well as Mother’s Day and Father’s Day. “My parents have most everything they need, and what they want most is healthy children,” she says.

Teresa also launched a community fundraising project, CURE, which stands for “Creating Unstoppable Research Efforts.” Reaching out to an extended network of family and friends, she began a letter-writing campaign encouraging donations via the Myotonic website, raising money from eight states and three countries and organizing a Dine Out for DM fundraiser at a local Buffalo Wild Wings restaurant.

“But I’ve learned its not really about the money, she says. It’s about a passion for the cure. And that’s where my passion lies - a cure for the disease - second only to my passion for my family. I want a cure for myself - and for everybody else.”

She tries to go to the national Myotonic Annual Conference every year. Her parents now join her. “And my baby brother comes too - he’s a huge advocate even though he does not have the disease himself.” (Of course, the whole family is affected by the disease through the members who do suffer from it, Teresa says.)

She finds the conferences inspiring. “You meet people who’ve been exactly where you are. It’s so uplifting to learn about the research - people out there devoting their careers to find a cure for your disease. They are doing that for me. That’s very humbling and inspiring. There’ve been so many advances since I was diagnosed. The researchers are amazing people and I am so grateful to them.”

The high point of Teresa’s involvement in Myotonic’s work came during the 2014 Myotonic Annual Conference in Washington, DC, where she joined the Myotonic on Capitol Hill and lobbied US Senators John Cornyn of Texas and Amy Klobuchar of Minnesota in support of Myotonic’s work. She also had the honor of presenting a Myotonicaward to Senator Klobuchar, who introduced a bill to support and expand research into the muscular dystrophies. “That was such an uplifting and rewarding experience,” Teresa says, “perhaps the most rewarding moment of my life.”

Over the long years since her diagnosis, Teresa has gradually come to understand that while she lives with this disease, it is not her identity. “I’m not sick, my body is,” she asserts. “My wheelchair doesn't define me - it’s just a tool, like a pair of glasses. I can’t say I accept this disease, but I do accept that I have to battle it. You have to be stubborn because you have to fight every day. But I can be free in my heart. To me that realization is super powerful.”