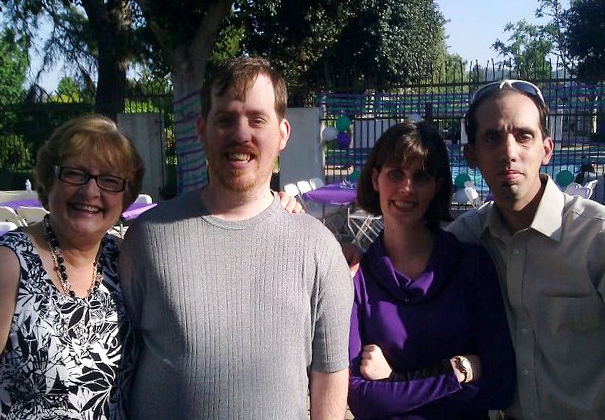 Diane Bade’s three children — Scott, Nicholas, and Christine -- have myotonic dystrophy, as did her husband, Chris Bade, who passed away in 2005. Though not affected herself, Diane, like many parents and spouses, works tirelessly to educate herself, her family and her community.

“My family had been misdiagnosed for 18 years, and we really wanted to know why we were different,” Diane says.  “Finally, in 1993, we received the correct diagnosis. There were so many questions and feelings of isolation.” In 1998, the very first disease-specific support group gathering was held for people with DM.

“Once we began to meet other similar families, it was like a family reunion,” Diane adds. “There were so many commonalities. Then the IDMC (International Myotonic Dystrophy Consortium) invited families to their 2005 conference, which, until then consisted only of research-based folks. Out of that conference, Myotonic was born.”

Diane and her family have been very active on DM issues, starting the first annual camp for young adults called Camp Bade. This sleepover camp at the Bade home allows young people to come together from all over the country to talk, have fun and support each other.

For Diane, the sense of joy and satisfaction that attendees experience among their peers motivates her to continue the experience. When Chris’ father, Milton, passed away, his family set up a foundation that supports medical research and assistance to people in the DM community, allowing more young adults to attend Camp Bade. The foundation also contributes funds for the Young Ambassadors program which helps send young people to the Myotonic Annual Conference.

Diane says that when she sees young people together—teens and early adults—she notices a growing bond. “As a mother, it’s rewarding to see these young people accepting one another and laughing and enjoying themselves because that doesn’t happen in ‘normal’ circumstances,” Diane explains.

“The Young Ambassadors attend the Myotonic Annual Conference to learn more about themselves. They talk about personal issues – questions they have that they can’t talk about with their parents,” Diane says. “In this context, they’re able to talk about these things and get support and answers from their friends and peers. The more knowledge we equip them with, the more we empower them to manage their own disease.”

Diane adds that, “It was such a joy to hear so much laughter in my house that first time I hosted Camp Bade. My kids are quiet much of the time.  They watch life happen a lot –they are engaged with TV—but they don’t participate much,” she says. “But when they meet their peers and their friends, they’re engaged like children, laughing and experiencing joy. With this disease it’s easy to fade into the sidelines. They don’t say anything and many times just accept whatever comes their way. There isn’t that drive to reach out. But when they get together, they feed that enthusiasm within each other.

“My children live vicariously through others,” Diane continues. “Their social networks and outlets are limited by their circumstances. They’re okay with all that, which is the funny part. I’m not okay with it, with them living through others. I want them to live life, but they are completely okay with watching life happen. At the same time, they are aware of the joy and experience of fun and laughter at Camp Bade. They love to have fun.”

Diane is eager to empower these young adults. They talk a lot about the resources that are available to them, such as medical information and clinical studies. They’re also encouraged to get involved with registries and participate in longitudinal studies. Diane says she wants her kids to be a resource and participate so the next generation can benefit.

“My kids don’t have a lot of goals,” explains Diane, “But I do want them to help break the cycle of having babies with congenital DM. And the best way to help children with low self esteem is to get them together and educate them. I like to see them helping one another, not defining who they are by the disease.

“If I’ve learned anything from my children, it’s to respect people where they are, and not push my expectations on them. I want them to embrace the life they’re given, and enjoy it.”