Erich Maurer of Switzerland: Seeing DM from a New Perspective 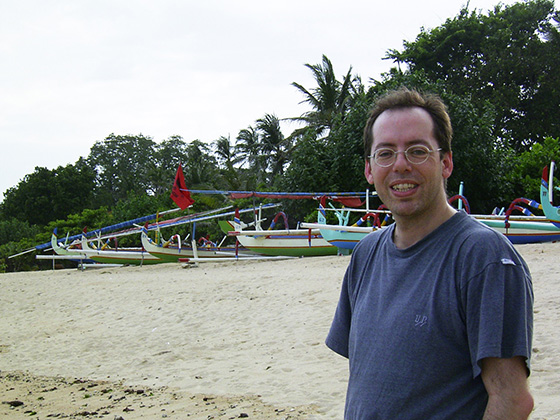 Erich Maurer grew up in a small farming village in northern Switzerland. His mother was diagnosed with DM1 after complications from a surgical procedure. After his mother’s diagnosis, some of the Maurer family health history began to make sense, and they learned that several other family members, including his uncle and cousin, also had DM.

When Erich was a young man, his mother took him to a DM meeting in a nearby city. Erich remembers, “I looked around and saw people in various stages of the disease. I didn’t want to face the fact that what I saw could be part of my future, so I pushed it out of my mind.” He was young and rebellious, and was overwhelmed by the idea that he, too, could have DM. Erich was just beginning to understand other aspects of his identity and didn’t want to consider that DM would play a role in his future.

After moving to Basel, Switzerland in his early twenties Erich began to experience DM symptoms, such as heart arrhythmia and difficulty with fine motor skills. Forced to face the fact that he might have DM, he finally relented to his mother’s wishes that he be tested. He received a positive diagnosis for DM1.

It was around this time that Erich met Hariyono, a psychologist living in Singapore and the man who would become his husband. “I had been living in total denial,” says Erich. “When we decided to live together I realized I needed to tell Hariyono about my DM1. I sent him an email and asked him to carefully consider moving forward with our relationship. He emailed back within a couple of hours and said that he loved me, and would be there for me and he has been ever since. We’ve been together for 16 years.”

Even with the love and support of his husband and close friends Erich, like many others living with DM, has struggled to accept his diagnosis. “It was hard to come out as a gay person, but I had no idea how hard it would be to come out as a person with DM1.”

As his symptoms progressed, Erich searched the internet for information. During his search he came upon the Myotonic Community Forum and posted a question. He received a response from Leslie Krongold, Ed.D., the Outreach Director for Myotonic. Leslie, who also has DM1, was able to provide Erich with the information he sought; more importantly, however, she connected him to a community of people from across the globe that share his experiences with DM by encouraging him to participate in Myotonic Facebook groups and forums.

“The most important thing about these groups is that you know you are not alone,” says Erich. “It’s a great place to go to get real answers. There’s no reason to reinvent the wheel all over again, you can post a question and get a number of answers from people who live everyday with DM and experience different symptoms and treatments. Their collective knowledge and experience is so very helpful.”

Life has been challenging for Erich recently because his DM symptoms have progressed. He had to leave his job last summer, as his muscle weakness and lack of stamina were taking a toll on him. “It was difficult," he explains. "My boss was very understanding and helpful, but he insisted it was time to take care of myself and figure out the next chapter of my life.” Before his transition out of the workplace he spent some time in a physical rehab program, where once again he was confronted with his identity and his place in the community. For years Erich had been with the same employer, a nonprofit organization that helps people with physiological challenges gain job training and placement. But after the loss of both his job and some of his mobility, he began to question who he would become.

There have been some bright spots in this process. He now uses a cane and is willing to accept the assistance of others. In his words, Erich was “forced to see another side of life that I hadn’t allowed myself to see: the beauty in the everyday kindness of strangers.” He describes people offering to hold his bags or carry something for him after watching him struggle in public. "It is very heartwarming,” he says. “And while I am grateful for their help, I also see that I am helping them by opening their eyes to the physical challenges that some people face. Additionally, I noticed that I have become much more aware of small things and pleasures that brighten my day--the little things you normally tend to overlook when you are overwhelmed by a demanding job.”

Today, Erich keeps busy by writing about his experiences and helping others with DM on several support groups. He has also translated the Myotonic Toolkit into German, for release by Myotonic in the coming months. He feels that he not only has a strong support structure, but that he is also able to adapt his new tasks to his physical and psychological need. Recently Erich connected with a young German woman who was just diagnosed with DM1 and is working with her to help her understand her diagnosis. “What I’ve learned is that people need only the information they can take in at that moment. Doctors have a tendency to give you several pamphlets or books of information, which can be too much. So I start my conversations by asking, ‘What do you want to know today?'”

Erich is settling into his new lifestyle. His husband Hariyono continues to be a source of great support and encouragement. He also feels really fortunate to have great healthcare and government assistance. Erich tries to stay positive despite the health challenges he faces. “I find that I need to focus on what I have today and not what I don’t have," he says "It can really change how you experience your life regardless of whether you have DM or not."