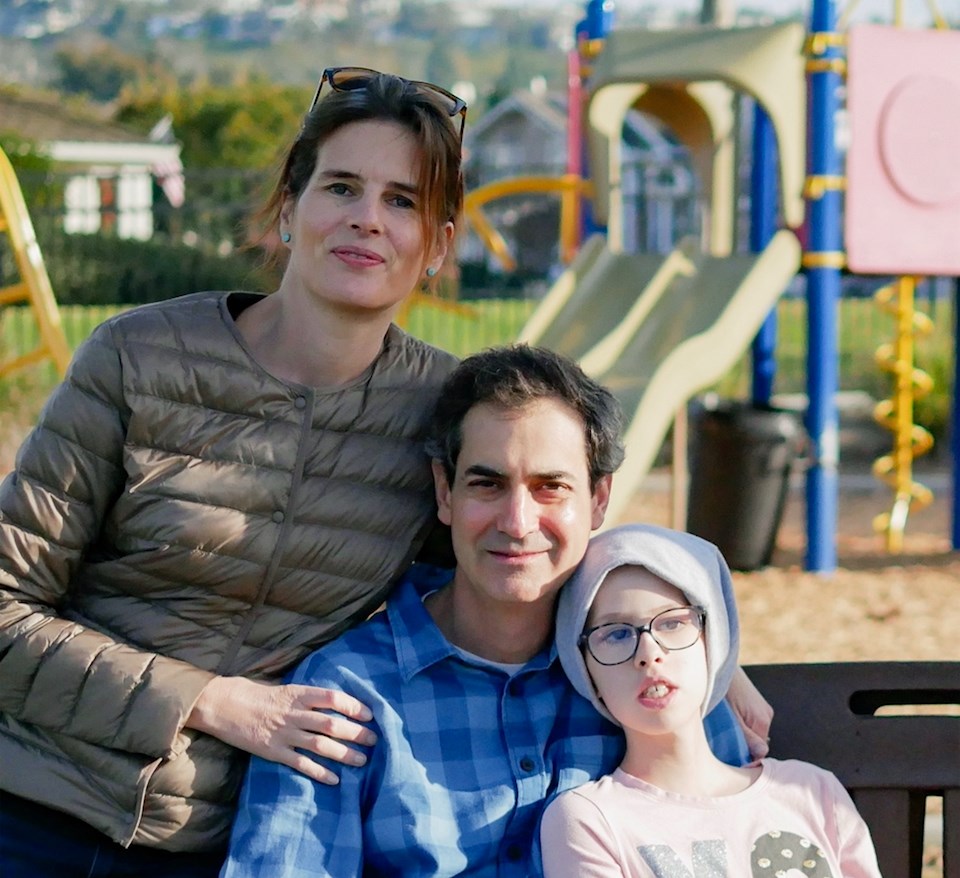 Sarah and David Berman had never heard of myotonic dystrophy until their baby Zoé was born with the congenital-onset form of the disease, which is known as CDM.

"Zoé couldn’t suck," Sarah recalls. "She was just kind of limp and open-mouthed. She didn’t really cry. She had low muscle tone." Fortunately, Zoé was able to breathe on her own, unlike many babies with CDM, but she spent two weeks in the neonatal intensive care unit and had to be nourished via a feeding tube for awhile.

A Surprise Diagnosis with Implications for the Whole Family

“They brought a group of neurologists in, and they quickly suspected it was myotonic dystrophy (DM),” David remembers. Because CDM is most often inherited from a mother who has adult-onset DM, even if her own symptoms are minimal, they then checked Sarah for myotonia, a delay in relaxing muscles after use, which is a hallmark of adult-onset DM.

“They had Sarah do the handshake test,” says David, to see how long it would take her to relax her grip after shaking hands with a doctor, “and that made them even more confident in their diagnosis.”

Eventually, genetic testing of Sarah’s blood and that of several family members (who live in France) confirmed that she had adult-onset DM1 with minimal symptoms, as did her father, two uncles and one cousin. Her brother, who was 19 when Zoé was born, was found to have the juvenile-onset form of DM1, for which the main symptoms are often cognitive and psychosocial abnormalities.

The diagnosis came as a consolation to Sarah’s brother, who finally had an explanation for many of the issues he had struggled with throughout his life. “My brother had symptoms of learning disability and stamina,” Sarah says. “He would fall asleep in class, so they said he was lazy. They thought he had Asperger’s syndrome, because a lot of people with myotonic dystrophy have autistic-like behaviors, things that are a little bit different, quirky. Zoé’s diagnosis was a revelation, and he thought, ‘Oh, at least there’s a name for why I am different.’”

Perhaps even more importantly, her brother was found to have previously unrecognized cardiac problems related to his DM1 and recently had a pacemaker-defibrillator implanted. (Sarah was also found to have an irregular heartbeat, and she is being monitored by a cardiologist. So far, no treatment has been needed.)

The birth of MDF in 2007 coincided with Zoé’s birth, although the Bermans did not learn of its existence immediately. During Zoé’s first few months, they got help from the early intervention services provided by the state of New York. The help they got was great, David recalls, “but a lot of people that are working with neuro-atypical kids and special needs kids haven’t been exposed to someone with myotonic dystrophy, which has such a wide range of symptoms.”

That, he says, is why finding MDF in 2008, after the family moved to Piedmont, California, in the San Francisco Bay area, was so helpful.

One of the first ways in which Foundation helped them was via the MDF Toolkit, which can be downloaded from the website in several languages.

“That was helpful because it explains what you need to be aware when you’re interacting with doctors and caregivers, such as the dangers of anesthesia.” David notes, “They were able to put that information in our hands right away and make us smarter and more empowered when talking to physicians.”

Since then, MDF has been extremely helpful in providing education, support and connections, David says, adding that MDF has further evolved since those early days.

“The MDF Annual Conferences help foster community, but you also get medical professionals that talk about various aspects of the disease, like gastrointestinal issues, and breakout sessions that get very specific. I come away having learned a lot in a very small amount of time.”

David, who works on the business side of a midsize pharmaceutical company, appreciates the parts of the conferences devoted to discussion of new drug development for DM. “It’s always encouraging to hear that progress is being made, as I know there are often challenges along the way.”

In February 2014, Sarah teamed up with other mothers to create a webinar on tips for caring for children with CDM. She also hosts her own blog, Zoé’s Latest Adventures and Other Stuff. “I’ve connected with a lot of families with my blog,” she says.

In addition, both Zoé and Sarah have participated in several observational DM studies that they learned about through MDF, and the Bermans are part of the Myotonic Dystrophy Family Registry, which collects anonymous data from families affected by DM and helps researchers find potential study participants.

Through MDF, David says, the family has been able to connect with people who are “further along than we are. For us, I think it has been helpful just to meet people in the community and learn about some of the issues they’re facing.”

Sarah, now 44, says her DM symptoms remain quite manageable, although she recognizes that this may change. Her heart and eyes are regularly monitored, and her mobility is becoming somewhat impaired.

“I walk funny,” she says. “If I go on a walk, I need David or a walking stick, but otherwise, I’m pretty mobile. I do Pilates. I try to stay active.”

Teaching 4-year-olds is “the most exhausting job I’ve ever done,” she says. “I don’t know if I’ll be able to do that for very much longer, but I like to be active. I also volunteer at a store where the money goes to the schools, and I volunteer at Zoé’s school quite a bit.”

Zoé, now 8, is in second grade in a public school, with special supports, such as an aide and occupational, physical and speech therapies. “MDFhas given us a lot of advice,” Sarah says, mentioning in particular a conference session on individualized education programs [IEPs] that was really helpful” in planning Zoé’s school program.

The very active little girl has been wearing glasses since she was 4 months old and has had surgery to straighten one of her feet. She uses a transportation chair for long distances and wears ankle-foot orthoses (lower-leg braces known as AFOs) in school. She used a walker when she first started to walk (at age 2), but she no longer needs one.

In addition to her general therapies, Zoé participates in adaptive physical education, swimming, adaptive soccer and baseball, and therapeutic horse riding, also known as hippotherapy. In 2014, Sarah participated in a webinar about this form of therapeutic recreation and was a panelist on the benefits of hippotherapy in children diagnosed with MD at the conference in Washington, D.C.

Now that her daughter is getting older, Sarah says, the social barriers posed by her leg braces, weak mouth muscles and fatigue are more formidable than they were when she was younger.

Sarah hopes someone will write a book for children about the disease. "There’s awareness for autism in schools," she says, but school is a place where her daughter is often misread and misunderstood.

In the classroom, Zoé’s cognition and fatigue require attention and patience that teachers don’t always have. “I have explained to the teachers how her body impacts her everyday life,” Sarah wrote in a recent post on Zoé’s Latest Adventures and Other Stuff, “how her muscles weaken, how her lack of focus and attention stem from this fatigue, how Zoé can do great things if she is given the time to think, if you break down the tasks, if you shorten the exercise, if you give her a chance!”

Sarah has connected with other mothers of children with CDM through MDF Annual Conferences, the MDF website and a MDF support group in Oakland, California. She’d like to start a support group specifically for families with CDM-affected children.

On her blog, Sarah doesn’t sugar-coat anything. “Life is hard and tough, and it is no easy feat to keep the chin up,” she wrote on March 12, 2016. She writes about how hard it is for Zoé in school, where she is often “misread and misunderstood.”

But in the same post, Sarah had this to say about herself and her growing daughter: “I have been thinking about what I wrote a couple of years ago when I first started this blog – how Zoé's disability and mine made me a better person. In fact, I think I was misguided. I am not a better person. I am a different person – different in every way, ready to conquer all challenges, ready to advocate for my child, ready to not let go of the fact that we all deserve a chance.”