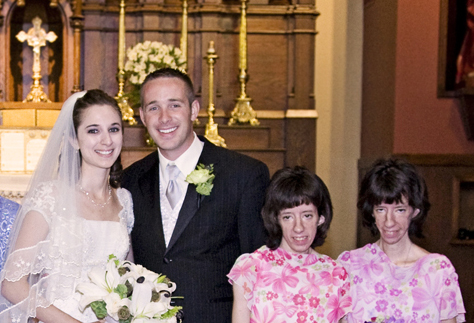 Jessica Flynn, 26, grew up with a mother and twin sisters who all live with myotonic dystrophy; her mother has adult onset DM, and her sisters have congenital DM. Although Jessica hasn’t experienced any symptoms, she’s in the process of getting tested to determine if she’s a carrier. Jessica often hears the comment, “It must have been so hard growing up with family members affected by DM,” but she didn’t see it as a burden or a problem, it was just her normal life.

Jessica’s mother, Robin, was a ballerina for 16 years and began to suspect that something was wrong when she was still a teenager. Robin started noticing myotonia in her hands, and soon discovered that DM was carried in her genes from her mother’s side of the family. Regardless of genetics, Jessica says her mother remained active and DM didn’t greatly affect her quality of life for some time.

“Myotonic dystrophy didn’t really begin to affect my mother’s life until her late 30s or early 40s, when she started falling down a lot,” Jessica says. “Since then, the disease has progressed pretty severely -- it’s very hard for her to walk, and she had to get a pacemaker about 10 years ago. As she ages, her facial muscles are weakening and she also has a lot of daytime sleepiness.”

Though Jessica started to notice her mother’s health deteriorating when she was a child, it wasn’t until adulthood that she realized the direction this disease was taking and what that potentially meant for her.

Jessica’s grandmother, Katie Walter, discovered Myotonic, got involved and began educating herself so she could better understand what her stepdaughter and granddaughters were experiencing.  In fact, Katie and Jessica attended their first Myootnic Annual Conference together a few years ago. “One thing I learned was that even though I don’t have any symptoms, I could still have the disease,” Jessica states. “I could follow a similar path as my mother or could pass DM on to my children. Knowing this, we’re seeing geneticists to remain proactive.”

Understandably, simple blood tests have been emotional. “On one hand, I want to know if I have the repeat expansion. On the other, I don’t think it would stop us from having more children,” she says.  A year after finding out that she needs to be tested, she says it’s been difficult to get the tests because her mother hadn’t even had her tests completed until recently.

Jessica’s twin sisters, Rebecca and Sandra, were born prematurely and immediately diagnosed with DM. “While I was growing up, DM was normal for me; it was just the way our family was,” Jessica explains.  “I started noticing differences between me and my sisters when I began to develop mentally and they didn’t.” Rebecca and Sandra, now 28, live with their mother and, developmentally, remain at about a five-year-old age level.  They’re also physically small for their age.

“It wasn’t difficult growing up in a family like mine. It’s just a part of my life; it’s who we are,” Jessica says. “My sisters and I are very close. As kids, we did everything together. It wasn’t until I was in middle school that I started noticing that we were different. Suddenly, we didn’t have a lot in common. But that didn’t affect how I felt about them.

“Eventually, however, I realized I was different and it was harder for me to connect with them the way I once did. I started making my own friends and finding my own identity. Now that I’m married, live away from them, and am starting my own family, we don’t have the same sister relationship. But when my daughter was born, our family dynamic changed again. My sisters love babies. They love her, they dote on her, and that has brought us back together.”