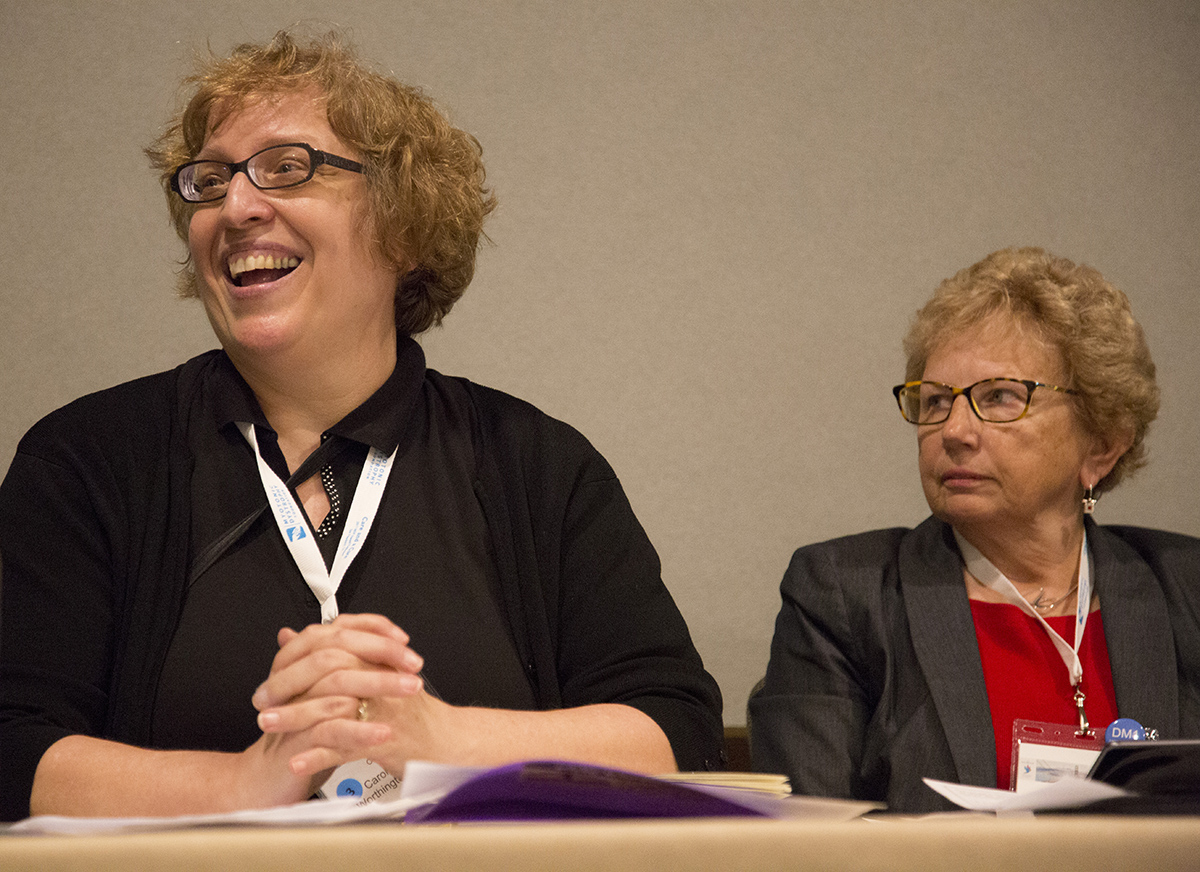 Taking DM Patient Advocacy to the Next Level

When Karl Valek tested positive for myotonic dystrophy (DM) in 2006, the diagnosis was not a complete surprise. Karl and his wife, Carolyn, who live near Columbus, Ohio, knew that both of Karl’s younger sisters had recently been diagnosed with DM after years of declining health. Karl, at age 42, was experiencing symptoms, including worsening of a general fatigue that had begun in his twenties. He tired quickly during the day and would even fall asleep while driving. A career geologist, Karl transitioned to less demanding, part-time work.

Karl and Carolyn struggled with the diagnosis. “We told ourselves that the disease wouldn't be as progressive as it had been in his sisters,” recalls Carolyn. “We had to work through our feelings of denial, anger, sadness, and frustration - all the things you go through when you're grieving. We've come to understand that in a long-term chronic disease, you grieve each loss of normalcy.”

It has been nearly a decade since Karl tested positive for DM. With the help of a leg brace and ankle-and-foot orthotic he is still walking, but Karl now has what he calls a “laundry list” of symptoms treated by an army of doctors. In addition to excessive daytime sleepiness, he experiences respiratory weakness, swallowing problems, gastrointestinal ailments, cardiac conditions, hypothyroidism, and other endocrine issues.

As Karl’s symptoms progressed, Carolyn stepped in as his full-time medical case manager and advocate. In 2012, she retired early from her job as a communications specialist for a large company and went back to graduate school where she earned a certificate in patient advocacy.

“I learned to navigate the medical system - to help with his medication and his insurance and to be sure that he had all the right coverage,” Carolyn recalls.

“She knew to ask the doctors the right questions,” Karl adds.

After Karl was diagnosed, Carolyn sought out information on the Myotonic website. “All those resources were helpful,” she says, “especially the ones on occupational therapy and anesthetic risks. And I found the health supervision checklists very effective.” Carolyn created a binder with a section on each of Karl’s body systems affected by DM. She took notes, asked questions, and secured a printed summary of each doctor’s visit to include in the binder.

One big effort she undertook was to create a central medical home where all of Karl’s needs could be met. Now, his nine doctors and therapists are associated with the Ohio State Wexner Medical Center in Columbus - and all are familiar with DM and its complications. (Learn more about the importance of having a central medical team.)

Carolyn’s knowledge and experience came in handy a few years back, when the Valeks' son Scott, now 19, was also diagnosed with DM. During his school years, Scott had been diagnosed with ADHD and autism spectrum disorder. He was a budding actor in school, but Carolyn began to notice that increasing weakness in his facial muscles was making it harder and harder to understand what he was saying. Then Scott began to experience excessive sleepiness and reduced stamina.

“As Scott’s executive functioning declined and the diagnosis was confirmed, I was immediately able to get him connected with the right people and to get a good baseline so we could see how the disease was progressing,” says Carolyn. Today Scott and Karl go to many of the same doctors. Carolyn believes that her experience with Karl made it much easier for her to help her son.

The goal of Carolyn’s work as a patient advocate is to slow down the progression of the disease as much as possible by knowing enough to get the right medications and treatments to extend and improve quality of life. “For Karl the goal is to stay out of a nursing home. My goal is to support that vision for him,” she says. She points to new medications and a cardiac pacemaker that are making Karl’s life easier. And she and Karl agree that the last few years have been pretty good ones. Karl hasn't had pneumonia, nor has he taken a serious fall, both of which he suffered in the past.

The couple also sees social improvements. Carolyn encouraged Karl to join the local senior center, where he joins friends for a weekly current events discussion and then a group lunch. “The person with DM can still find joy and interesting things to do,” Carolyn says. “You just have to encourage them to get out of their comfort zone and do things with other people. Socialization is so important. We arrange frequent visits with family and friends, which Karl really enjoys.” 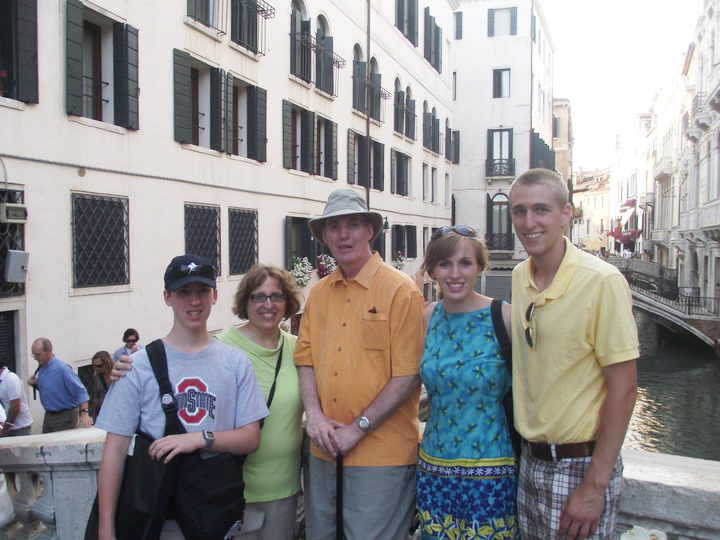 One big treat for the Valeks came in the form of a Mediterranean vacation in 2011. Karl has always loved to travel. In talking with other families living with chronic illness, Carolyn hit upon the idea of a cruise. Cruise ships employ onboard doctors and a cabin with a balcony would provide a place for Karl to rest each day and gaze out to sea in comfort. Karl was even able to join the family on a tour of Venice, with Carolyn maneuvering him from a wheelchair into a vaporetto water taxi.

While Karl doesn’t usually use a wheelchair, it does help him conserve energy while traveling, Carolyn says. “It often takes a village of family members and caregivers to support the DM-affected person when they travel - but that person does not need to feel helpless. When we flew to Europe, Karl helped out at the airport by rolling an upright suitcase on wheels with each hand as I pushed him in the wheelchair.”

“Some of these things are still possible,” Carolyn says. “You just have to be patient.”

“It helps to approach travel with a sense of humor,” Karl adds. “And you need to do it while you still can.” 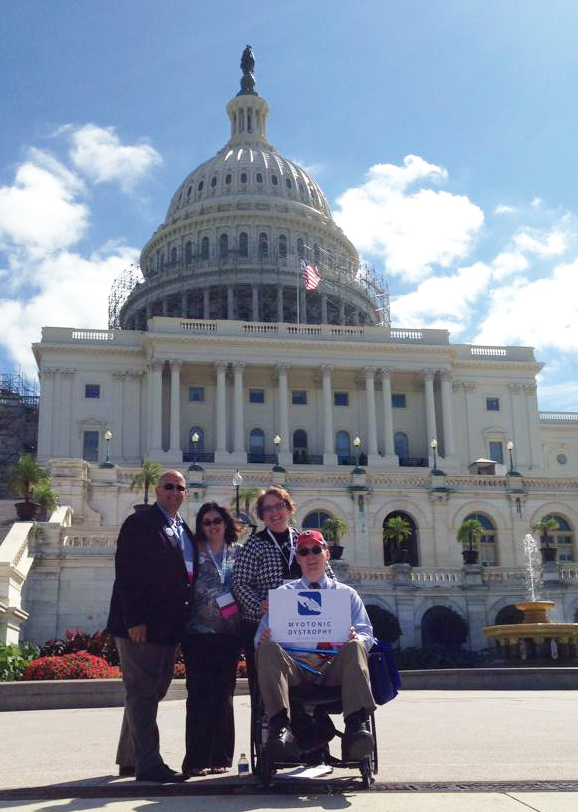 Having found the Myotonic website so helpful in her own quest to understand DM, Carolyn offered to become a warm-line volunteer for Myotonic. She talks to family members, answers their questions, and points them to resources. She and Karl founded Myotonic’s Ohio Support Group. “Maybe it’s a mother or grandmother,” Carolyn says. “They want to talk to another family dealing with this disease - someone who understands myotonic dystrophy.” Carolyn also participates in Myotonic's webinars and the monthly Myotonic Virtual Caregivers Support Group, and she has contributed recipes to “Myotonic Cooks,” a cookbook created to share community-generated recipes that are both satisfying and easily swallowed.

As part of her certificate program in patient advocacy, Carolyn conducted an online survey of DM-affected individuals, caregivers, families, and friends, with questions focused on the challenge of health care management. She organized and analyzed her survey responses into a presentation called “Advocating in the Clinic: Educating and Supporting Your Doctors,” which she presented at the 2014 Myotonic Annual Conference in Washington, DC.

Carolyn and Karl also have been active in legislative outreach, joining TeamMyotonic in Washington, DC, to advocate for increased federal funding for DM research. “You feel you are helping yourself when you do the legislative advocacy,” Karl says. “We might not find a cure in time to help me, but we might help my kids.”

“If we’ve made a difference in someone else's life by volunteering, that is its own reward,” Carolyn adds. “When Karl's was diagnosed - that was a very difficult time. But you can't stay there. If you stay, you're stuck. There are a lot of lessons that come out of dealing with this disease - and they’re not all negative. Karl and I have never been closer. And if we can share the blessings we have experienced, we can give other people hope for how they can get more out of life day by day.”