The Korsgaards: From Coping to Community Engagement 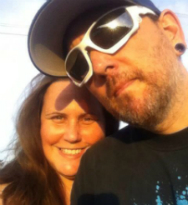 In 2001, when Kristin Korsgaard was pregnant with her first baby - her son, Jackson - she mentioned to the clinic staff that her husband’s father was affected by some form of muscular dystrophy. But the staff was focused on her health and prospects for a successful delivery. “We want to know about conditions on your side of the family,” she was told.

Three years later, the fourth-grade teacher from Concord, California, was pregnant with her second son, Logan, but by then one crucial fact had changed. Her husband, Aaron, had begun to experience myotonia in his hands and had been to a neurologist for testing. He called Kristin on the phone while she was driving home from work one day. “They say I have myotonic dystrophy.” At first, Kristin misheard him - she was so sure that he was fine. But once she understood, the news “hit me like a ton of bricks,” she says. “For the first time in my life, that I couldn’t even talk to anyone about what was going on. I couldn't even face my parents and tell them.”

At her next prenatal ultrasound appointment, she brought up the subject with the ultrasound technician. “You know my husband has just been diagnosed with myotonic dystrophy.” The technician didn't seem troubled at first, but she left the room and soon came back with several colleagues. They stopped the ultrasound, and began to explain what the disease meant for her family.

”“They said, ‘this can be inherited through either the mother or father, and your child will have a 50 percent chance of getting it,’” Kristin remembers. “Suddenly it hit me that they were talking about both my kids. It was a very emotional time.

Now concerned that Logan might be born with physical problems, the clinic scheduled extra specialists for his birth. “I remember looking around and seeing all these people in the delivery room. It really upset me,” Kristin recalls. But when Logan was born, he seemed fine, like a normal baby.

In fact, it’s unclear as yet whether Logan has myotonic dystrophy. While Kristin had her older son tested, because he seemed to be having some disability and weakness (that test was negative), she has not had Logan evaluated. And while Logan does not have the facial characteristics or, so far, the physical infirmities sometimes associated with DM, he has had problems with hyperactivity and lack of attentiveness in school, and he has required speech therapy and occupational therapy.

Kristin and Aaron are deciding whether or not to have Logan tested. “But there are things you need to do first,” she says. “You need to be sure you’ve secured good insurance, and you need to prepare yourself emotionally for knowing. It was wrenching when I had my older son tested,” she says. 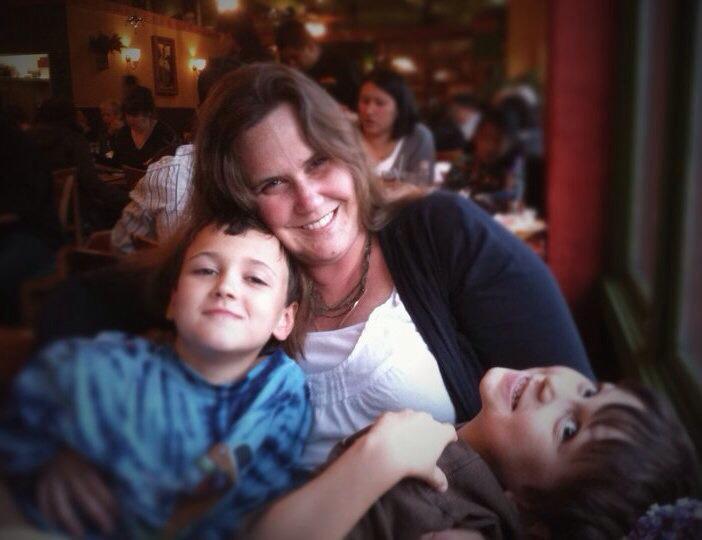 If you had known Kristin’s husband, Aaron, in his teens, you would not have thought he could be affected by a genetic neuromuscular disease, Kristin recalls. “When I was 17, my best friend took me to meet this very cool skateboarder. Two weeks later we were dating. We’ve been pretty much inseparable ever since.”

And skateboarding - Aaron’s skills were near-professional level - was not his only physical talent. He was also an expert snowboarder and motorcyclist, and for a while he made part of his living photographing motorcycling and motorcycle racing, a grueling occupation. He began working at 14, and as a teenager worked three jobs. He had a million hobbies, Kristin recalls, and he was very physically active right through his twenties.

The couple married young, in part because Kristin was headed off to college at UC Davis and there was housing there for married students. They were twenty years old “and we were going to be together no matter what, so marriage was the next step,” Kristin remembers. “All I wanted to do was to marry Aaron.”

After Kristin finished college, the couple worked at various jobs around California. For a while, Kristin was a production and personal assistant in the movie industry and Aaron worked as a manager for Caffino, a string of coffee shops. Eventually, they moved back to the Bay Area to start their family. Aaron graduated from the Academy of Art College in San Francisco and launched a decade-long career in photography, new media, and DVD authoring. Kristin finished up a teaching credential and a Master’s Degree in Education in 2004, just as her second son was born and the family learned of Aaron's DM diagnosis.

Once the diagnosis was made, Kristin and Aaron were able to look back and see signs that might have pointed toward DM. For example, even as a teenager, Aaron’s feet had hurt, and Kristin had asked then whether that might be related to Aaron’s father’s muscular disease - no, she was told, it was only flat feet. Later, when Aaron’s affinity for active sports led to inevitable injuries, his body had a very hard time healing. At one point an ankle cast was so painful that the doctors diagnosed him with “cast anxiety” when it now seems clear to Kristin that the “muscles were constantly cramping underneath and there was no way to move or relieve the myotonia.”

In the decade since his diagnosis, Aaron has slowed down a lot. While he’s still mobile, he tires easily, for which he takes medication. For a while, there was some concern that he might be depressed, “but through a lot of conversation with counselors and doctors, it was determined that he just doesn't like having this disease and that he wasn’t happy. It was never determined that he had depression. We continue to work on communicating our feelings and working through difficult times with the help of others,” Kristin says.

Aaron maintains many of his old interests. He fixes motorcycles and is active in shooting sports, instructing in hand gun safety and working on high-end firearms for competitive shooters. And he has primary responsibility for the kids during the week while Kristin is teaching. “He does everything for them,” Kristin says, “which can be a real challenge. Aaron doesn't look disabled, so other people don't always understand his disease. For example, if the kids are late for school, the staff may not understand that he’s just having a hard time getting started that day. Or people may not get why he would rather stay home than go into a crowded and confusing environment when he is so exhausted and doesn’t feel well.”

Kristin is beginning to think about changing her own professional path so she can be home more. “It’s getting harder for him to raise the kids. He does a great job, but it’s exhausting. It’s something I’m struggling with; I want to spend these prime years of our lives together as much as possible.” 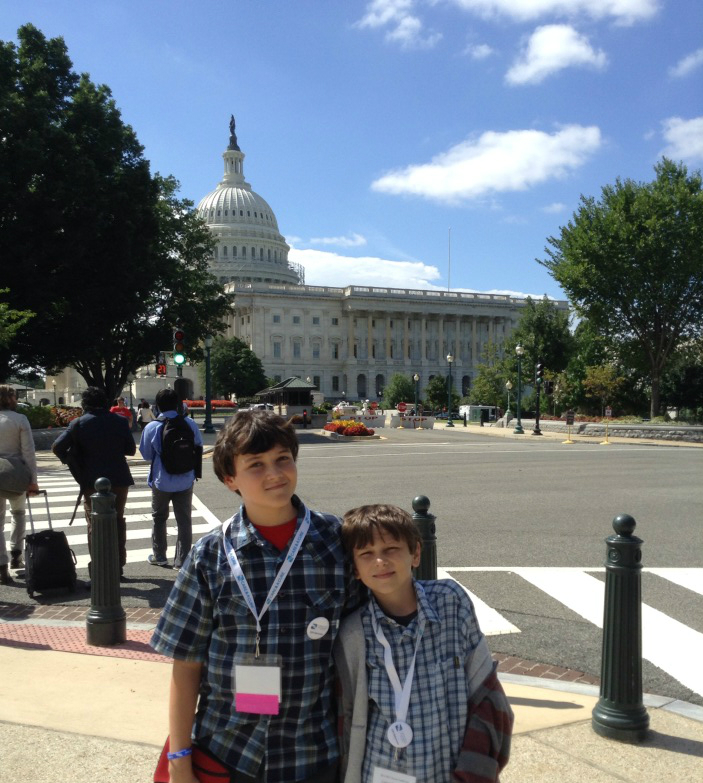 After Aaron’s diagnosis Kristin and Aaron gradually began seeking out information on DM. In 2009, they took a big step by attending the Myotonic Dystrophy Family Conference in Manhattan Beach, California. Kristin was particularly impressed by the way doctors were making an effort to collaborate with patients. “That collaboration is so important,” she says.

Kristin has made a lot of friends attending Myotonic Annual Conferences and through her involvement in support groups and online communities, and she makes an effort to point other families to the reliable information resources she’s come to trust. “If you’ve gone through it yourself, you want to make sure that people go to the right source for information,” she says. “You hear from a lot of discouraged people - it’s is a very discouraging disease - and I want them to know some of the things I wish I had known early on.”

But conferences also can be difficult for patients, she says, and sometimes her husband does not attend. “It’s hard because they see patients in the later stages of the disease, at different cognitive levels, for example, and that can be scary. Caregivers get a lot of support and information at conferences, but they can be hard for the patients.”

One conference the whole family attended was the 2014 Myotonic Annual Conference in Washington, DC. Kristin spoke at the meeting, and the family went to Capitol Hill to advocate for increased funding for DM research. “The boys got to speak to lawmakers and even the Surgeon General of the United States about having a father with muscular dystrophy - that was life changing for us,” Kristin recalls.

The couple were particularly pleased that they could tour the boys around Washington, and that Aaron was able to make the trip, get around fairly easily, and that they could design their days around Aaron’s limited physical energy. “That’s our biggest goal right now,” she says, “is to do things while we can. That's the message I hear from others - do what you want to do now, don't wait.”

Home / Story / The Korsgaards: From Coping to Community Engagement

MDF is excited to announce Tom McPeek's appointment to our Board of Directors! Tom has been an active member of the MDF community for over 10 years. Find out more about Tom, his family, and his work in the DM community.

Each month until the MDF Annual Conference in September, biotechnology and pharmaceutical partners, large and small, working on treatments and a cure for myotonic dystrophy will sit down with our community to share their progress and answer your questions.

Do you have questions for DM doctors and therapists? Join us in 2021 for a series of “Stump-the-Expert” sessions with DM clinicians in diverse specialties.