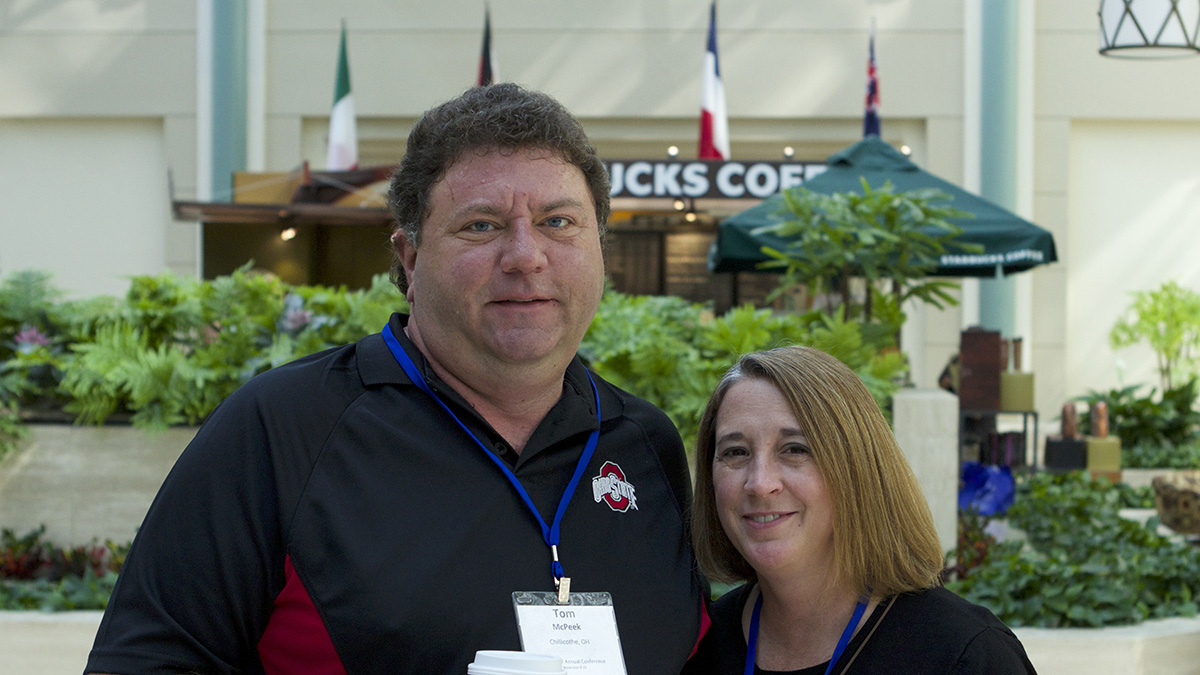 Tom McPeek had been an award-winning dog trainer who loved to go on outings with his Airedale terriers. Once a year, he would drive from his home in Chillicothe, Ohio, to South Dakota to hunt pheasants during day-long trips in which he would hike ten to 12 miles.

Tom doesn’t hunt anymore. He’s had to give up raising dogs as well. After a career working on the human services side of corrections—starting as a juvenile probation officer and most recently serving as a regional director of a halfway house for adult felony offenders—Tom had to retire six years ago because of the progression of his myotonic dystrophy type 2 (DM2). For the past few years Tom has volunteered as the MDF DM2 Support Group Facilitator.

“I had enough physical problems and some cognitive issues that I had to go out on disability,” he said. “I would rather be working right now, but I just didn’t have a choice.”

DM2 tends to have a later onset and is often slower to progress than myotonic dystrophy type 1 (DM1), and it is caused by a mutation of the CNBP gene rather than the DMPK gene that drives DM1.

In retrospect, Tom realizes the disease began to show itself when he was in his teens. He suffered growing pains that never seemed to go away. He was unable to build muscle mass like his peers, or keep up with them in sports. In his twenties, he loved to work on cars, but if he used a screwdriver, he could not release it from his grip. A doctor dismissed such problems as carpal tunnel syndrome.

But in his forties, Tom noticed a significant loss of muscle mass. He had problems training for his annual hunting trip and had to switch to a lighter rifle. He developed intense pain and weakness in his hips and leg. When he talked to people, he sometimes had difficulty finding the words he wanted. By the time he sought a diagnosis, he learned that two of his uncles and an aunt had DM2. In May of 2008, a genetic test and electromyography—a diagnostic procedure to test how well nerves that control movement communicate with the muscle—confirmed what he had suspected.

The family connection may have spared Tom a diagnostic odyssey faced by others. He notes that many people with DM2 may never get diagnosed, as their symptoms can be dismissed as problems associated with aging.

His uncle introduced him to an online myotonic dystrophy group, and then in 2011, convinced Tom and his wife Kim to join him at the 2011 MDF Annual Conference in Clearwater, Florida. There, he met researchers studying the disease and many of the myotonic dystrophy patients he had been communicating with online.

“The information at the conference was wonderful, but being able to meet all of these people who had the same issues that I had—we just fell in love with the people and made dear friends,” said Tom, who noted he learned about treatment options from the experiences of others. He also welcomed the opportunity to sit down with researchers and talk to them in an informal setting. He’s remained an active leader in the MDF community since then.

Tom said one of his proudest moments came through his participation in the MDF Patient-Focused Drug Development meeting, which was held during the 2016 MDF Annual Conference in Washington, DC. MDF convened the halfday meeting with senior officials from the U.S. Food and Drug Administration (FDA), patients and families, scientists and industry professionals the agency’s understanding of the issues myotonic dystrophy patients face and what they hope to gain from potential therapies.

During a panel presentation that included him and three other people living with DM1, Tom shared his experiences living with DM2, including his daily regimen, which involved taking 21 different pills and two injectable medicines to treat a variety of symptoms related to the disease. This includes treatments for pain, depression, daytime sleepiness, high cholesterol, low testosterone, vitamin D deficiency, and diabetes, as well as treatments to minimize the side effects of drug interactions. He also talked about his use of a BiPAP machine to provide pressurized air while sleeping because of his problem with sleep apnea.

“It would be great if [a future therapy] could somehow reverse any damage that has been done cognitively and to our muscles,” he told the FDA representatives, “but I would be very happy if we could simply stop the progression for now.”

Though his disease continues to progress—he’s had to cut his water aerobic workout down to 30 minutes a day from 55 minutes—he tries to remain as active as possible. He calls his wife a “wonderful caretaker” who provides him with support, hope, and confidence while allowing him to do everything within his abilities. He recently went inner tubing on the snow, but admits he paid a price. He suffered pain for a month after that outing before going to a doctor and finding out that what he had dismissed as muscle pain from overexertion was a broken foot caused by a fall during his adventure.

Despite his condition, he considers himself fortunate. He does not use a wheelchair, he doesn’t require oxygen, and his disease progression has been slow. He has no interest in self-pity and encourages others to stay optimistic.

“Don’t let your disease bring you down emotionally,” he said. “Find things that make you happy. Be as positive as you can be about the situation.”